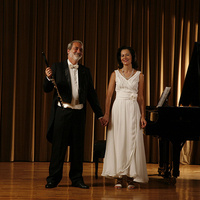 The 11th season of the Tutunov Piano Series will open with flute-piano, husband-wife duo Maria José Souza Guedes and Luis Meireles and will feature a program of sonatas from Bach, Beethoven, Reinecke and Brahms.

The group, founded by the flutist Luis Meireles and pianist Maria José Souza Guedes - has performed around the word since their debut in 1996.

In 2009, Meireles/ Souza Guedes played Fernando C. Lapa’s double concerto for flute, piano and string orchestra, with the Oporto National Orchestra under the conducting of Andrew Grams. Several well-known Portuguese composers dedicated works to them, that were played as world premieres. As a duo, they have learned from famous artists such as Sequeira Costa, Maria João Pires, Augustin Dumay, Aurèle Nicolet, Patrick Gallois, Istvan Matuz, Jean Ferrandis and Maxence Larrieu, among others.

Maria José Souza Guedes has been a piano teacher at Porto Music Conservatory since 1982 where she has trained many young pianists, whose merit has been recognized in both national and international competitions. A pupil of Ernestina Silva Monteiro and Fernanda Wandschneider, Maria studied in Vienna under the guidance of Professor Hans Graf.

Tonight's program will include:

The performance will be livestreamed and is available for $20/household online at https://sou.universitytickets.com in person tickets are $25 per person.