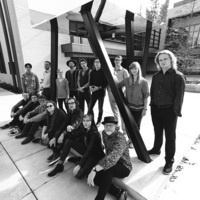 The Southern Oregon University Percussion Ensemble, directed by Terry Longshore, was invited to perform Michael Pisaro's ricefall at the 2020 Bang on a Can Long Play Festival in New York City, along with John Luther Adams' Strange and Sacred Noise. 17 SOU students and two faculty were to travel to New York City for the festival in early May. The trip was sponsored by Bang on a Can, the Oregon Center for the Arts, the SOU Percussion Club, the SOU Interclub Council, and the SOU Provost's Office. Since the festival has now been postponed, the ensemble has been busy preparing a socially-distanced version of the ricefall to be released at the exact date and time of the originally-scheduled performance.

ricefall is for 16 performers who pour rice at varying rates, specified by the score, over eight different types of material: metal, wood, stone, paper, hard plastic, rice, dry leaves, and ceramic (or glass). The resulting sound is remarkable–-invoking cascading water, white noise, and even light over sound. The ensemble is preparing a 4x4 Video Grid Performance of the work, in which each performer will record their own part independently from their "shelter in place" location, and then the audio will be mixed together and set to the video of all 16 performers. Also featured will be a conversation between Terry Longshore and Michael Pisaro.

Michael Pisaro is a composer and guitarist, a member of the Wandelweiser Composers Ensemble, and Director of Composition and Experimental Sound Practices Specialization at Calarts. His work is frequently performed in the U.S. and in Europe, in music festivals and in many smaller venues.

This innovative video performance will be broadcast at the same time as the originally scheduled performance, to have taken place at Shapeshifter Labs in Brooklyn, on Friday, May 1 at 4:00pm Pacific/7:00pm Eastern Daylight Time. The video will be available on the Oregon Center for the Arts YouTube Channel: