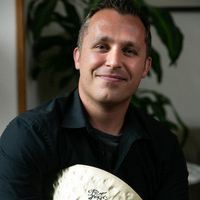 This performance will be in person and livestreamed here: https://youtu.be/2lHK0Z_rhmA

Called “hypnotic, enthralling…dynamic” (Oregon ArtsWatch), with playing described as “a striking diversity of styles and spirit” (Boston Musical Intelligencer), Christopher Whyte (b. 1983) is known for his wide-ranging artistry as a percussionist, timpanist, collaborator, composer, and educator. He has presented recitals, concerts, and masterclasses internationally in Asia, Europe, Canada and throughout the United States.

As an original member of the Portland Percussion Group, he is dedicated to fostering percussion performance through dynamic concerts, engaging collaborations, and the creation of new music. Through their annual call for scores, the Portland Percussion Group has provided the impetus for over sixty new works for percussion chamber ensemble. In October 2020, the quartet made its European debut performing a full-length concert at the GAIDA Festival of Contemporary Music in Vilinus, Lithuania in addition to collaborating on Steve Reich’s iconic Drumming with the Colin Currie Quartet.

He is a founding member and resident faculty of the International Percussion Institute, a summer percussion performance and research institute, marimba competition, and composers workshop held annually in Aberdeen, Scotland. Recent projects of the Institute include a collaboration with British composer Joe Duddell and the Sound Festival to develop new works through shared experiences between young composers and Institute percussionists. Whyte also serves as resident percussionist with Third Angle New Music Ensemble, collaborating with a wide range of musicians and composers to advance the development and performance of new music. He has collaborated closely with composers Gabriela Lena Frank, Pauline Oliveros, Sarah Hennies, William Kraft, Allen Strange, Stephen Taylor, Michael Johanson, and Mendel Lee, among others as an active commissioner of new music for percussion.

He regularly performs with the Oregon Symphony, including on their Grammy-nominated recordings Spirit of the American Range and Aspects of America: the Pulitzer Edition, as well as with the Portland Opera Orchestra, Oregon Ballet Theater, fEARnoMusic, The Bach Cantata Choir, Portland Symphonic Choir, and the Portland Gay Men’s Chorus. Additional performance credits include the Vancouver Symphony, Oregon Bach Festival, Astoria Music Festival, Atlantic Symphony, New Bedford Symphony, Eugene Symphony, Newport Symphony, ALEA III contemporary music ensemble, and the Boston Civic Symphony. Most recently, in January 2020, he performed Kenji Bunch’s Triple Jump for solo marimba at New Music Gathering. Whyte is also in preparation for the release of his debut solo recording featuring works by Christopher Cerrone, Sarah Hennies, Toshio Hosokawa, Eric Ewazen and an original composition for percussion and electronics, commissioned by Third Angle New Music and inspired by the process of winemaking so intertwined in the life of Oregon’s Willamette Valley.

A dedicated teacher, Whyte is currently Instructor of Percussion at Portland State University and has served on the faculty of Western Oregon University. He serves as the co-director of the Portland Summer Percussion Academy, a week-long educational gathering of high school percussionists focused on a broad range of western and non-western percussion instruments. The Academy annually brings together students and faculty from around the United States. Whyte has served as a member of the Percussive Arts Society Percussion Ensemble Committee since 2015 and is currently President of the Oregon Chapter of the PAS. Conference presentations or performances include: the College Music Society (CMS), Northwest region NAfME conference, The Midwest Clinic, nienteForte Festival, Oregon Music Educators Association Conference (OMEA), the PICA Festival, New York’s Fringe Festival, and Music for All National Chamber Music Festival.

Chris lives in Newberg, Oregon with his wife Charlotte, their son Forrest, and their Akita, Decan.

FREE and open to the public.