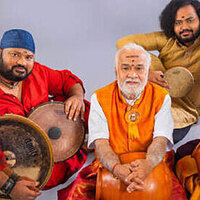 This FREE VIRTUAL concert is open to the SOU Community and the general public. Percussionists from SOU, RASIKA, and Rhythmic Connections, a South Indian Percussion Ensemble will come together to provide a celebration of South Indian music that is filled with the universal rhythm language: Konnakol.

Legend Vikku Vinayakram is known as the God of ghatam (an earthen pot used as an instrument) and began his career at the age of 13.  When Vinayakram first played at the Rama Navami festival in Thoothukudi, India in 1957, his ghatam was accidentally broken by a child named Ganesh (one of the best-known and most worshipped deities in the Hindu culture). This incident was a good omen to Vinayakram and became a springboard for not only his artistry, but has led to a long and successful career.

Vinayakram plays Carnatic music (evolved from ancient Hindu traditions) and is credited with the increased popularity of the ghatam. The hepatonic scale and musical concepts such as the circle of fifths are believed to have originated in the theory of Carnatic music.

Vinayakram's honors include a 1996 Grammy Award nomination for Best World Music Album and Padma Shri, by the Government of India in 2002, the Padma Bhushan, and the Sangeet Natak Akademi Fellowship in 2012, one of the highest honors in the performing arts awarded by the National Academy for Music, Dance, and Drama. In 2016 he was awarded the Dr. M.S. Subbulakshmi Centenary award.

Vinayakram is Principal of Sri Jaya Ganesh Tala Vadya Vidyalaya in Chennai, India, the academy established by his late father and teacher in 1958. Vinayakram's son V. Selvaganesh is also a renowned percussionist having toured with John McLaughlin's group Remember Shakti.

Konnakol is the spoken reference to all South-Indian drums and is used all over the world by dancers and musicians to share their musical ideas. This universal rhythm enhances our feel for time, pulse, and groove and enables us to vocalize and memorize complex rhythmic phrases.

We hope you will join us for an evening filled with vibrant, colorful, rhythms that will create a memorable South-Indian experience!

I'd like to register but the link isn't working for me. Is registration open yet? Thanks.

Register
This event content is powered by the Localist Community Event Platform.