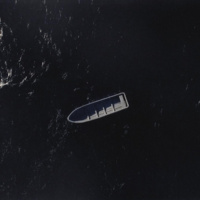 Migrating Bodies: For(saking) Life, Liberty, and the Pursuit of Happiness

According to the United Nations Refugee Agency’s annual Global Trends Report, released in June 2019, nearly 70.8 million people were displaced at the end of 2018. The causes of displacement and migration – war and violence, famine, climate change, and economy– indeed, the struggle to survive and have a better life, seem unending and are, if anything growing more dire, even as many world leaders see refugees and immigrants as threats to their cultures and pawns in their political strategies. The artists in Migrating Bodies address the subject from both personal and historical perspectives.

Visit Schneider Museum of Art at sma.sou.edu for more information.

Tuesdays 10am to 4pm

Wednesdays 10am to 4pm

Thursdays 10am to 7pm