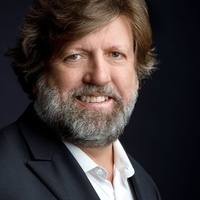 LIVE STREAM Shakespeare and Politics: An Interview With Oskar Eustis

David McCandless, Director of Shakespeare Studies at Southern Oregon University, will conduct the interview. According to McCandless, Eustis is the perfect person to discuss the political relevance of Shakespeare in contemporary America. “Eustis has been an impassioned advocate for the democratizing force of Shakespeare’s work for quite some time,” he remarks.
In addition to continuing the Public tradition of offering free “Shakespeare in the Park” every summer, Eustis has created two innovative Shakespeare programs in the past decade: The Mobile Unit, which stages Shakespeare’s plays at prisons, homeless shelters, halfway houses, and battered women’s centers; and the Public Works, which presents large-scale participatory productions with casts combining hundreds of New Yorkers with a small cohort of professional actors and musicians. In 2018, Eustis himself co-directed a Public Works production of Twelfth Night, reconfigured as a 90-minute musical with a mostly BIPOC cast.

Eustis’ most high-profile Shakespeare production at the Public took place in 2017, when his mounting of Julius Caesar sparked a national controversy, primarily because the title character bore a strong resemblance to Donald Trump. The protests that ensued sometimes erupted within the theater itself and stopped the action of the play.

Eustis’ professional career began at the Eureka Theater in San Francisco, where he commissioned and helped develop Tony Kushner’s landmark epic, Angels in America, whose world premiere he later co-directed at the Mark Taper Forum in Los Angeles. Before taking over at the Public in 2005, Eustis was Artistic Director of Trinity Repertory Company in Providence, Rhode Island.

In addition to overseeing scores of groundbreaking Shakespearean productions at the Public, Eustis has nurtured significant new work by the country’s most prominent theatre artists In particular, he was instrumental in developing Lin-Manuel Miranda’s off-the-charts musical hit, Hamilton.

Oskar Eustis has served as the artistic director of The Public Theater since 2005, after serving as the artistic director at Trinity Repertory Company in Providence, RI from 1994 to 2005. Throughout his career, Eustis has been dedicated to the development of new work that speaks to the great issues of our time and has worked with countless artists in pursuit of that aim, including Tony Kushner, Suzan-Lori Parks, David Henry Hwang, Lin-Manuel Miranda, Richard Nelson, Rinne Groff, Tarell Alvin McCraney, and Lisa Kron. He is currently a professor at New York University and has held professorships at UCLA, Middlebury College, and Brown University.

Tune in to the ShakespeareAMERICA YouTube channel at 12:45pm on the 15th and click on the live-stream