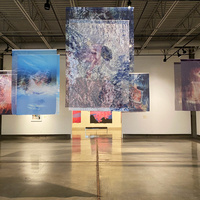 FREE, and open to the public. Suggested $5 donation.

FACE COVERINGS REQUIRED FOR EVERYONE

Because Jackson County is currently in the “high” level, SOU will require face coverings for individuals regardless of vaccination status in indoor areas, effective Aug. 1, 2021, until further notice.

Joan Truckenbrod is credited as being one of the earliest pioneers of digital art in the 1960’s. Since the early seventies, Truckenbrod has produced algorithmic art by creating computer software programs based on algebraic formulas that described natural forces such as wind currents or how light reflects off curved and irregular surfaces. These artworks were created through Fortran, a computer program suited for numeric computation and scientific computing and drawn on plotter paper, the only material available to her at that time. Since then, digital color and print technologies have evolved to say the least.

Our exhibition, Joan Truckenbrod: Digital Fibers – 1975 to Present will include some of Truckenbrod’s early coded algorithmic drawings and textiles from the seventies and eighties, her digital paintings from the nineties, fiber art from the early two-thousands and her current work of woven tapestries. The computer as a tool for experimentation and exploration of the natural world has always stayed with Truckenbrod. Each of the forms noted above relating to and inspired by nature and moving through both the artist’s hand and computer programs.

Joan Truckenbrod was a Visiting Artist at numerous universities, colleges and conferences, including the Institute of Contemporary Art in London, International Society of Electronic Arts in Helsinki and Utrecht as well as in the US. Exhibitions include the The Whitney Museum of American Art in New York, New York, ARC Gallery in Chicago, Illinois and the Intermedia Arts Gallery in Minneapolis, MN. Her work has been featured in international exhibitions and include solo exhibitions in Paris, London, Chicago, and Berlin.  She has been awarded a Fulbright Fellowship in 1997, a Scandinavian-American Foundation Fellowship and an Illinois Arts Council Grant both in 1994, and a Fellowship at Kala Art Institute in Berkeley, California in 2003.  She has been an instructor at Northern Illinois University and a Professor in the Art and Technology Department at the School of the Art Institute of Chicago where she has taught a course titled Electronic Ritual and Ceremony. In 2003 her artwork was featured on the cover of Surface Design Journal, a quarterly print publication focusing on contemporary fiber arts accompanied by an article from Polly Ullrich as well as a Surface Design Award.

Exhibition made possible by the Oregon Arts Commission and The Ford Family Foundation.