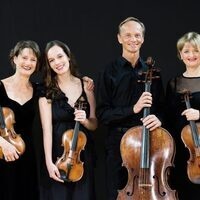 The New Zealand String Quartet has enjoyed three decades of acclaim for its programming vision, exciting performances and award-winning CDs. Based in Wellington, the quartet is sought-after for its imaginative and varied programming, including revelatory performances of the classical quartet repertoire and exciting realizations of newer works from contemporary composers, many from New Zealand. On tour to major centers throughout Europe, Asia, Australia and North America, the New Zealand String Quartet’s world-class performances have garnered significant praise.

The New Zealand Quartet has recently returned to London’s Wigmore Hall while on tour through England and Europe. North American tours have spanned the distance from Hawaii to Montreal, and featured engagements for distinguished series at UCLA, the Library of Congress and Dumbarton Concerts in Washington, DC to the Frick Collection in New York and beyond.