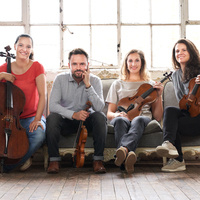 The Elias String Quartet is internationally acclaimed as one of the leading ensembles of their generation. Known for their intense and vibrant performances, the quartet has travelled the globe collaborating with some of the finest musicians and playing in the world’s great halls.

The Elias recently completed their groundbreaking Beethoven Project: performing and recording the complete string quartets of Beethoven. Broadcast by BBC Radio 3 and performed in 11 major venues in the UK, the Quartet have recorded the cycle for the “Wigmore Hall Live” record label. The Elias also took all-Beethoven programs to Carnegie Hall and San Francisco Performances. The Quartet was chosen to participate in BBC Radio 3’s New Generation Artists’ Scheme and is the recipient of a Borletti-Buitoni Award. They were awarded the 2010 BBC Music Magazine’s Newcomer of the Year Award and were nominated for an RPS Award and an Australian Art Music Award.

The Quartet take their name from Mendelssohn’s oratorio, Elijah, of which Elias is the German form.