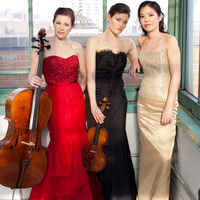 Lauded as “one of America’s finest young chamber groups” (Strad Magazine), the Claremont Trio is sought after for its thrillingly virtuosic and richly communicative performances. First winners of the Kalichstein-Laredo-Robinson International Trio Award and the only piano trio ever to win the Young Concert Artists International Auditions, the Claremonts are consistently lauded for their "aesthetic maturity, interpretive depth, and exuberance" (Palm Beach Daily News).

The Claremont Trio was formed in 1999 at the Juilliard School. Identical twin sisters Emily Bruskin and Julia Bruskin grew up in Cambridge, Massachusetts, and Andrea Lam grew up in Sydney, Australia. The Claremonts are all now based in New York City near their namesake: Claremont Avenue.