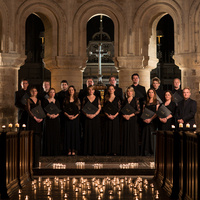 THIS CONCERT IS SOLD OUT

Described as “phenomenal” (The Times) and “devastatingly beautiful” (Gramophone Magazine), award-winning choir Tenebrae, under the direction of Nigel Short, is one of the world’s leading vocal ensembles. Passion and precision are Tenebrae’s core values. Through its continued dedication to performance of the highest quality, Tenebrae’s vision is to deliver dramatic programming, flawless performances and unforgettable experiences, allowing audiences around the world to be moved by the power and intimacy of the human voice.

Tenebrae’s ever-increasing discography has brought about collaborations with Signum, Decca Classics, Deutsche Grammophon, EMI Classics, LSO Live, and Warner Classics. In 2012 Tenebrae was the first-ever ensemble to be multi-nominated in the same category for the BBC Music Magazine Awards, securing the accolade of Best Choral Performance. “Choral music doesn’t get more magnificent than this.” (ClassicFM)