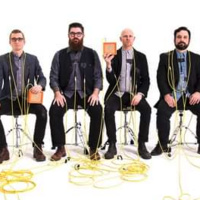 Through its sensational interpretations of modern classics, innovative multi-genre original productions, and “exhilarating blend of precision and anarchy, rigor and bedlam,” (The New Yorker), Sō Percussion has redefined the scope and role of the modern percussion ensemble, placing it at the leading edge of 21st-century music. Sō’s repertoire ranges from 20th-century works by John Cage, Steve Reich, and Iannis Xenakis, to commissioning and advocating works by contemporary composers such as David Lang, Julia Wolfe, Steven Mackey, and Caroline Shaw, to distinctively modern collaborations with artists who work outside the classical concert hall, including Shara Nova, choreographer Susan Marshall, The National, Bryce Dessner, and many others. Sō has appeared at Carnegie Hall, Lincoln Center, Walt Disney Hall, and TED 2016, and performed with Jad Abumrad, JACK Quartet, the Mostly Mozart Festival Orchestra, and the LA Phil and Gustavo Dudamel, among others.

The evening program will include: