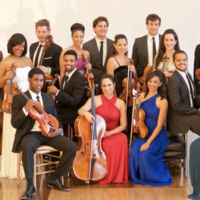 Britt Education, Chamber Music Concerts, and the Oregon Center for the Arts at SOU present Sphinx Virtuosi for an engaging and inspiring concert.

Program: Songs for Our Times

The Sphinx Virtuosi is a dynamic and inspiring professional self-conducted chamber orchestra and serves as the flagship performing entity of the Sphinx Organization – the leading social justice non-profit dedicated to transforming lives through the power of diversity in the arts. Comprised of eighteen accomplished Black and Latinx artists, a critical aim of the Sphinx Virtuosi is to evolve and transform the face of classical music through artistic excellence, pioneering programming, and impassioned community engagement. Its members serve as cultural and diversity ambassadors for audiences and communities around the United States during national tours.

Since 2004, the Sphinx Virtuosi’s concerts have been presented by the leading arts organizations, including annual return visits to Carnegie Hall where it is an established highlight of the fall season. Frequently selling out venues, the ensemble has garnered effusive accolades including from The New York Times that has described the group as "...top-notch...more essential at this moment than ever...a vibrant, assured performance..."; and The Washington Post that wrote “true to their name, the Sphinx Virtuosi call up the vision of an iconic mythological feline with its immeasurable power, unwavering command, and soulful beauty.”

For more info about this group go to: https://mkiartists.com/artists/sphinx-virtuosi#:~:text=The%20Sphinx%20Virtuosi%20is%20a,of%20diversity%20in%20the%20arts.