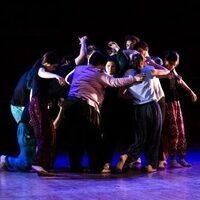 In honor of Black History Month, Black Student Union is Collaborating with the Dance Club to present a workshop opportunity for SOU students and staff. Join us on the 21st of February from 6:30-7:30 pm in the Stevenson Union Diversions room, to learn how to step! According to StepAfrika, "Stepping is based on a long and rich tradition in African-based communities that use movement, words, and sounds to communicate allegiance to a group. It draws movements from African foot dances, such as Gumboot, originally conceived by miners in South Africa as an alternative to drumming... the stepping tradition in the United States grew out of song and dance rituals practiced by historically African American fraternities and sororities, beginning in the early 1900s."
This workshop is open to everyone who wants to learn a new form of dance and anyone who wants to hang out with the Black Student Union! BSU will also be taking $10 donations and will be selling t-shirts for our supporters during the event. The other purpose of this workshop is to raise money so BSU can travel to a Historically Black College this May. Help BSU reach this one in a lifetime opportunity, hope to see you there!
Hosted by: Black Student Union
Additional Information can be found at: sou.campuslabs.com/engage/event/3212549