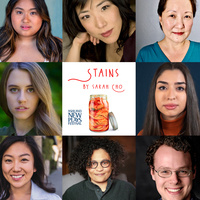 After two years of virtual theatre, Ashland New Plays Festival is back in person with developmental readings of stains, a comedic coming-of-age story by playwright Sarah Cho. Public readings at SOU’s Music Recital Hall of stains will be on Saturday, July 9, at 7:30 pm and Sunday, July 10, at 1:30 pm.

Stains is about growing up poor, female, and Korean American in Los Angeles, the play follows its teen protagonist as she is mentored by an imaginary friend—who happens to be a wisecracking blonde witch from a popular 90s sitcom.

“All my life, I watched my mom move through the world as a single parent, mother, sister, daughter, and an immigrant,” says Cho about the inspiration for stains. “I’ve witnessed her failures and her successes. I don’t think she knows how much she’s influenced my work and why I love writing female-centered stories.”

“I have never had my play performed in the great Pacific Northwest so this is going to be a first,” says Cho, “I’m really excited for the opportunity to collaborate with local theatre artists in the area. I am also so excited to finally meet the ANPF community in person! I have only known ANPF virtually since joining as Associate Artist.”

Cho is a Los Angeles-based comedy writer and playwright. She has received the IRAM New Play Award, the Iowa Arts Fellowship and was named the Alliance of Los Angeles Playwrights 2019-2020 Diversity Fellow. Her sketch comedy work has been featured on ComedyCake, WhoHaHa, and Funny or Die, and she is also co-host of the playwriting podcast Beckett's Babies. Development for stains began as part of Moving Arts Theatre’s MADlab Playwriting Development Program in 2021. As one of five selected playwrights, Cho wrote stains and developed it over the course of nine months as part of the MADlab program. The play was also recently selected to participate at the 2022 Great Plains Theatre Commons New Play Conference.

“I met Sarah years ago when she was my student in the film and media program at UC Santa Barbara,” shares ANPF Artistic Director Jackie Apodaca. “Even then, she stood out for her quirky sense of humor and deep capacity for storytelling. Her work is wild, sometimes shocking, and always utterly charming.”

“As we peek out from the past two years of the pandemic,” says ANPF Board President Peggy Moore, “we emerge hopeful that we can once again enjoy live theatre safely. We hope people will take the opportunity to join ANPF and the cast of stains to celebrate the rebirth of new plays – in person.”

Tickets to the readings are $25, available online and at the door, with a $15 option for students and those in need of access to lower pricing.

ANPF will be following COVID precautions similar to other theaters in the area. Please see our website for the most current requirements.