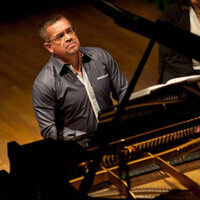 “To hear composers take my work and take it seriously… it’s a thrill.”
- Stephen Sondheim

Presented by the Oregon Center for the Arts at SOU, and conceived by concert pianist Anthony de Mare, LIAISONS is a landmark commissioning and concert project based on the songs of legendary musical theater composer Stephen Sondheim. The project has brought together 36 of the world’s foremost contemporary composers from across the musical spectrum, inviting them to “re-imagine” one of Sondheim’s songs as a solo piano piece.

The result is a brand new world-class piano repertory that reveals Sondheim’s influence across multiple genres, generations and continents, making the case for him as one of the 20th century’s greatest composers. Performed exclusively by de Mare through 2016, individual pieces can be combined to form an infinite variety of concert, recital and residency programs.

LIAISONS has played to critical and popular acclaim in cities throughout the U.S. and Canada, including world premieres of the first 32 pieces in two sold-out concerts.

Tickets for this very special Sondheim Celebration Concert are $30 per person, $25 for seniors, $5 student tickets. $75 package per person includes a concert ticket and a special VIP Reception with Tony de Mare following the concert.