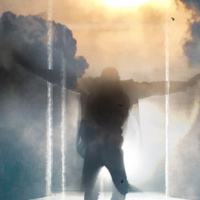 Inventing Life is a documentary film about Tell Tale, a theatre and dance piece that depicts engagement on stage between the authors and their two children. A piece of life on stage that should have opened a year ago in both Oregon and California in April of 2020, remaining on the verge of uncertainty in the  future, Inventing Life is an engaging and poetic film about the unfinished search to elevate the present mutual encounter between distant human beings. Working in the absence of live performance, it’s been filmed in theaters, nature, and abandoned spaces.

Teatro Patalò is an independent group of theatre artists based in Italy and founded by Isadora Angelini and Luca Serrani, both actors, playwrights, and directors. The group has created and produced performances that have toured at festivals and programs around the country. Specifically in this production, both artists collaborated with Dorin Mihai, a documentary and stage photographer, and Luca Fusconi, a sound engineer, electronic composer, and sound designer.